Our lecture about KiberaAID will take place on third of december at 7pm in Pfaffenhofen.

Kibera slum is home to a bustling population of over 500,000 people. The rate of birth is high amongst the teenagers as a result of unprotected intercourse and part of it is to be blamed on the congestion.

Proper parenting has also emerged to be a challenge since most of the children are not raised by their real parents, this is because a big number of the children were either left by their biological parents while still young due to death or were abandoned most probably at birth. Most of the children who were left by their biological parents while still young live with their relatives or you?ll find some living in the children’s home which have sprung up around the slum, and the relatives look after the children in the hope that maybe one day they’ll grow big and make it out of the slum, though most of the relatives are not financially stable .This has led to the increased number of children in the slum who just live to see another day with no hope of getting a better education in future. Most attend informal schools which are only meant to give them the basic knowledge of life since there is no guidance among the adults and if you?re lucky enough, you can attend a public school in hopes of getting a well-wisher who?ll push you through high school ? and that is not always easy. 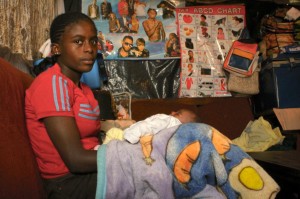 On the other hand there is a big number of children who are abandoned immediately after birth, teenage pregnancy is a commonplace here, most of the girls give birth with no source of support because fathers who are also teenagers deny responsibility in the early stages even before the baby is conceived, such behaviors are not even strange among the residence because it happens every now and then. Some girls give birth and leave the child with their grandmothers in the name of going to hustle for the baby, this has also increased the number of prostitution around since there is no accessible job without education. Most of the girls, if not all were raised in the same manner and it?s a matter replicating itself every now and then.

The boys themselves turn into criminals and hardknock thugs – having no otherwise cause the few available job opportunities are only for the learned. Kibera is a free place where you choose what you want to become, there’s no mentorship, and there are no role models. For long this has been the root cause of all problems in the slum.

Parents only struggle to put food on the table but ignore the important aspect of parenting. Most of the children will play on the muddy waters till late in the evening only going back to eat and sleep and wake up the following morning to repeat the same. This has made the children to grow up without vision and discipline because parents and guardians never took time to talk to them keenly on the important subjects about life. It has always been my wish if all the children in Kibera can access education to change their mindset because only a few are able to make it through that chain leaving many behind. It’s a depressing truth but this is a vicious cycle that can only be finished if proper education is instilled in between because until then the situation will continue to worsen.